Onshore wind turbines do not cause negative health effects. Dozens of independent, peer-reviewed studies conducted around the world have consistently found no evidence that onshore wind farms cause any negative physical health effects.

No, onshore wind turbines are not dangerous to human health.


The surge in onshore wind development in Ireland over the last several years has led to some misconceptions about wind turbines and potential public health impacts. Some of the health concerns that have been raised revolve around exposure to wind turbine noise, shadow flicker, and infrasound.

However, the Irish Department of Health says that “there is no reliable or consistent evidence that wind farms directly cause adverse health effects in humans.”1

That statement has been backed-up by decades of peer-reviewed, independent research across the globe from Europe to the US and Australia showing no adverse health effects on individuals who live near wind farms. 2


Wind turbines make low-level noise while in operation, producing noise around 35-45 decibels (dB) at a distance of about 500 metres from a turbine. To contextualise that, a kitchen refrigerator usually hums at about 50dB.3

A comprehensive review of environmental noise guidelines for Europe published by the World Health Organisation in 2018 said that there is “very little evidence” available showing adverse health effects of continuous exposure to wind turbine noise. 4

Furthermore, the WHO estimate the “burden on health from exposure to wind turbine noise at the population level to be low.”5

At Ørsted, we always design our wind farms so that the turbines are placed in locations that minimise or eliminate turbine noise to nearby residents.

In Ireland, turbines are always placed at least 500 metres from the nearest home, in line with the latest Irish Wind Energy Development Guidelines. Recent projects in Ireland have included a setback distance of 700 to 800 metres between turbines and residential properties to further reduce noise levels.


Wind turbines can create a phenomenon known as shadow flicker under certain conditions. Shadow flicker happens when the sun shines through the rotating blades of a wind turbine, casting a moving shadow.

The “flicker” caused by the rotating blades can be perceived as a nuisance to onlookers or nearby homeowners.

However, a 2017 report by Ireland’s Health Service Executive (HSE) stated that “there is insufficient direct evidence to draw any conclusions on an association between shadow flicker produced by wind farms and health effects.”6

With the help of computer models, we can help predict when, where and to what extent this problem will occur.

We design our wind farms to diminish this issue through a careful site selection process, turbine placement and tree planting. We also design our new projects so that so that we can cut off turbine operations at times when shadow flick conditions exist.


Infrasound is a type of sound that is thought to be inaudible for human hearing.  It has long been blamed as a source for a list of ailments – from nausea and sleep loss to anxiety.

Wind turbines do generate infrasound, but so do lots of other common, harmless sources.

Infrasound is emitted by many natural sources from ocean waves and thunder to wind. It also comes from machine-made sources such as road traffic, air conditioning and machinery.

Infrasound emitted at the levels created by wind turbines has conclusively been proven to have no impact on human health.

The WHO has said: “There is no reliable evidence that infrasound below the hearing threshold produce physiological or psychological effects.”7

Extensive international studies have shown that there is no evidence that the presence of wind turbines increases levels of infrasound. And there is scientific consensus that infrasound at normal levels does not pose any threat to humans.

Overall, the benefits to human health that come from the reduction of air pollution by producing clean, renewable wind power far outweigh the perceived health threats from wind turbines. 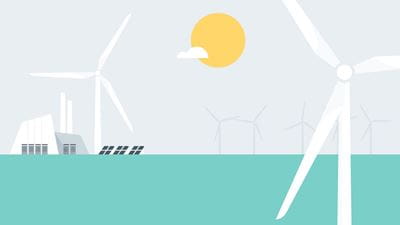 Is onshore wind power reliable?
Onshore wind is a highly reliable energy source. Modern onshore wind turbines are so powerful and have such advanced engineering that they can generate clean energy, even when wind speeds seem low.
Find out the facts

Do onshore wind turbines pose a threat to birds?
Well-sited wind farms have limited effects on birds. Onshore wind farms can pose potential risks to birds, but Ørsted does in-depth environmental assessments before building any new wind farms and uses cutting-edge technology to better understand the interaction between birds and turbines so that wind farms can be optimally sited.
Find out the facts 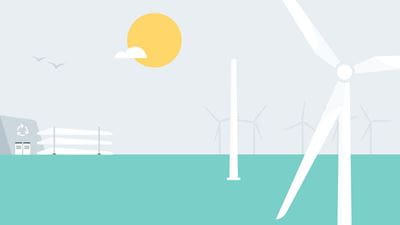 Can wind turbines be recycled?
When wind turbines eventually reach the end of their lifespan after at least 25 years, we recycle up to 95% of what they’re made of. We’ve made a commitment to find the right recycling solutions for the final 5%, too.
Find out the facts 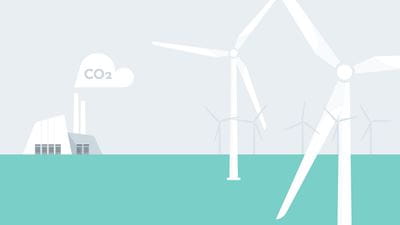 Are onshore wind turbines noisy?
Nearly everything with moving parts makes noise, and wind turbines are no exception. Wind farms are very quiet compared to other industrial facilities, but they do produce low-level noise.
Find out the facts 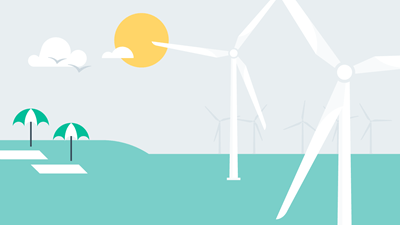 Do onshore wind farms harm tourism?
Onshore wind has become a major source of renewable energy across Europe over the last several decades. There is no evidence that the many onshore wind turbines now dotting rural landscapes put off tourists. On the contrary, many visitors express a positive feeling towards seeing the green transition in action.
Find out the facts

What is onshore wind power?

Find out how it works